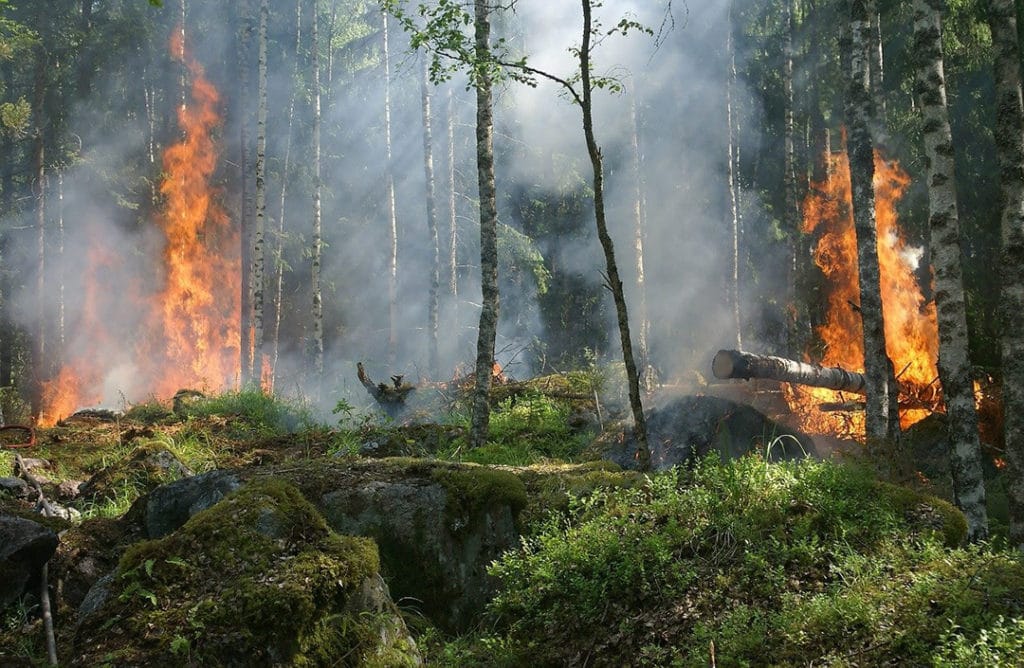 What Causes a Wildfire?

The most direct answer to that is an unfortunate one. Humans are usually the cause for most wildfires, 84% according to a 2017 PNAS study with the rest, 16%, caused by lightning strikes. Here are the most common causes of human-caused wildfires:

Forest fires started by people and natural causes spread quickly with the help of drought conditions, hot temperatures, high winds, and combustible material like unmanaged overgrowth on the forest floor. Climate change has altered seasons such that winters arrive later and summers earlier, creating ideal weather conditions for fires to spread quickly once they ignite. Environments are hotter and drier with less saturation which leads to faster fire spread.

These fire hazards are the reason for fire prevention measures like prescribed fire burns. When there is less combustible material, like overgrowth and dry grass in the way of wildfires, it gives firefighters a better chance of extinguishing a fire. Fire management tools are essential in order to lessen destruction from large fires.

Strong wind is the most threatening to a fire once it starts. The winds in California, for example, are the reason wildfires can get out of control so quickly. Winds in southern California are called the Santa Ana winds while winds in northern California are named Diablo winds. Both are downslope winds that bring heat from the eastern deserts in Nevada, Utah, and Arizona and the dry air contributes to high fire conditions.

Wildfires, also called wildland fires, are getting more destructive across the United States as we develop in areas that see naturally occurring burns, also called the Wildland Urban Interface (WUI).

While fires can be scary and destructive, there are ways to mitigate wildfire risk, especially if homeowners take it upon themselves to protect their homes.

A home with fire-safe vents is better protected from embers traveling ahead of wildfires. When an ember enters an open vent, it can ignite the home from the inside out. A fire-safe vent expands in the face of intense heat, protecting the home from embers. Ember Defense retrofits and installs Vulcan Vents on all exterior-facing vents, protecting a home’s most vulnerable entries.

Another home fire risk is the debris that builds up in gutters around the home. Gutters with guards block combustible material from getting caught and clogging the water collection system. Ember Defense installs Valor Gutter Guards on homes to further mitigate the risk of a home igniting in the path of a wildfire.

Finally, an exterior sprinkler system installed on a home’s roof will provide additional protection from a raging wildfire. Ember Defense works with Frontline Defense Systems which is a sprinkler system that emits an eco-friendly fire retardant.

By adding these products to a home, the chances of it igniting in the face of wildfire are much less. While firefighting efforts are the best they’ve ever been, with more research and federal funding, homeowners should do everything in their power to protect their homes.

Reach out today for a home evaluation from the fire professionals at Ember Defense.

*note that due to coronavirus precautions, Ember Defense will conduct all evaluations from outside the home and will be able to do so with no person-to-person contact. Though we are also practicing social distancing, we can still help protect your home from wildfire.