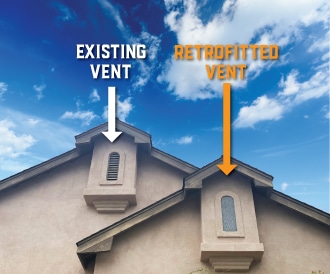 How Do Fire-Safe Vents Actually Work?

One of the best ways you can protect your house from burning down in a wildfire is by updating your vents. Traditional vents allow air in which is great for airflow in attic spaces and crawlspaces but not good for letting dangerous wind-blown embers in when there’s a fire near. Fire-resistant vents have a special intumescent screen, a 16-inch coating, that expands when temperatures rise. But how do they actually work?

Fire-safe vents still allow adequate ventilation. In fact, they are open all the time just like traditional vents. It’s only in the presence of intense heat, roughly 400 degrees Fahrenheit, that the magic happens. Vulcan Vents, which Ember Defense retrofits onto houses, feature Vulcan Technology, a patented self-closing honeycomb matrix that activates when fire is near.

However, the blocking mesh essentially protects the vents around the clock from embers entering the house. Then, the Vulcan Vents intumescent layer, covered with a proprietary baffle coating, expands when temperatures rise. The honeycomb mesh screen expands to block the vent openings ensuring that embers cannot get in and burn the house from the inside out when landing on combustible materials.

When the wire mesh screening on the vents closes, there is no space for embers to blow in. Your home protects itself to oncoming embers and flames.

Watch this test of a standard vent vs. a Vulcan Vent in the face of fire:

The Vulcan Vent becomes a firewall, protecting the most vulnerable parts of your home by preventing ember entry. The efficiency of this product has led to approval from CAL FIRE and the Office of State Fire Marshals (OSFM). The vents are also the only vents on the market to pass both the Wildland Urban Interface (WUI) testing standards for ember and flame intrusion (ASTM E 2886/E 2886 M and ASTM E 2912) as well as the one (1)-hour fire test under the ASTM E 119 one (1)-hour fire test standard.

Where provided, ventilation openings for enclosed attics, enclosed eave soffit spaces, enclosed rafter spaces formed where ceilings are applied directly to the underside of roof rafters, and underfloor ventilation shall be in accordance with Section 1203 and Sections 706A.1 through 706A.3 to resist building ignition from the intrusion of burning embers and flame through the ventilation openings.

Vulcan Vents can be retrofit to existing vents or added to brand new construction including:

One place you can start hardening your home is with ember-resistant vents. As a homeowner, the more you can do to help your home protect itself, the easier it will be to evacuate faster and with peace of mind.

Call today for a home evaluation!