Homeowners Are Taking Fire Risk into Their Own Hands

It’s becoming evident each year that wildfires are getting more intense and causing more destruction than ever before. There are many conversations around the “reasons” for worsening fire seasons from climate change to lack of resources to poor forest management to power equipment failure.

While each of these reasons warrants their own conversations, the point is that fires are getting worse and destroying homes and lives, especially in rural areas. It’s important to point out, however, that whenever there is a fire, it’s best to listen to evacuation orders so that officials don’t have to worry about getting you out of harm’s way if the fire gets out of control.

That being said, fire resources like multiple fire crews, fire retardants, water drops, and fire trucks can be stretched thin, especially when there are multiple fires burning, like in the instance of the Dixie Fire and Caldor Fire burning simultaneously this year. While crews were working tirelessly to fight the Dixie Fire, many firefighters had to switch gears and fight the Caldor Fire. Oftentimes, fires are so hectic and out of control that firefighters can do nothing to save structures but just ensure that the fire doesn’t spread.

This has led many property owners to take firefighting into their own hands by buying their own water trucks, digging their own fire lines, and converting military vehicles into firefighting rigs in order to stay behind and protect their properties.

While fire professionals are pretty against homeowners protecting their properties themselves, some do see some value in preparing and training people in rural areas. In many regions, there is a happy medium between fire officials and citizens.

Groups of volunteers have sprouted up in Oregon and Idaho under the name, Rangeland Fire Protection Association. State officials train the volunteers, often ranchers who live in very remote areas, to report and put out fires before they spread. They utilize donated fire equipment and gear and use their own water sources to respond more quickly than state and federal firefighters to extinguish remote fires.

Marin County fire Battalion Chief Graham Groneman told the New York Times that he is wary of homeowners deciding to stay and fight a fire on their own. He understands the sentiment of taking ownership and initiative to protect your property but he suggests that being proactive instead of reactive in these situations would be safer and more beneficial.

How does he suggest that homeowners prepare for fire instead of staying behind to fight it themselves? Home hardening!

Instead of staying behind in an evacuation, make sure your property is prepared for fire.

Making sure your property is cleaned of flammable materials is paramount when a fire is burning nearby. That means raking pine needles, planting non-flammable plants, and putting patio furniture and barbecues into a garage if you have time before leaving. The first five feet around the home should be cleared entirely. Again, if you have time before you leave, open the fence and gate doors as this will stop the fire’s path to the home as well. The whole point of defensible space is to deter fire from spreading up to the house via plant debris or flammable items.

Spraying Phos-Chek Fortify, a safe, long-term fire retardant around your home will also help stop a fire from spreading and making it to the home. This clear spray can render decks, fences, and foliage non-flammable and is safe for pets, people, and animals around the home. Phos-Chek Fortify lasts until heavy rain and can protect property through the fire season. 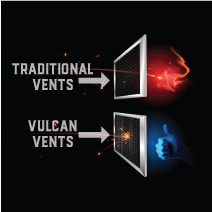 Another way to protect your home or business is to retrofit all vents with Vulcan Vents. Homes are often destroyed by embers making their way into open vents and burning the home from the inside out.

Vulcan Vents are built with an intumescent screen that expands and closes in the presence of high heat, effectively blocking out embers. Fire-safe vents are paramount in a home hardening plan and we can help install them on every vent that faces the outside. 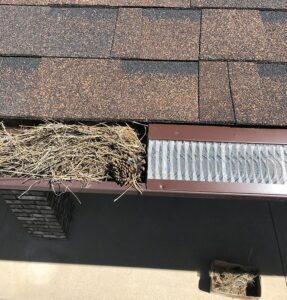 Another way homeowners can harden their structures is by installing gutter guards to block debris from building up and becoming a fire hazard. Valor Gutter Guards are the best in the industry, built with an s-curve design, micro-mesh technology, and all-metal construction.

Gutters collect dangerous debris and are often made out of plastic, which is a material also more susceptible to catching fire. When a fire is burning nearby with embers flying in front of flames, gutters can become fire hazards and lead to a home burning down.

Perhaps one of the most powerful layers of wildfire home defense is a wildfire sprinkler system. The sprinklers are installed on the roof and can soak the home with water or a fire retardant mix, depending on the system, and lower the ambient temperature around the home minimizing chance of ignition.

Ember Defense is here to help homeowners harden their properties. We come out to evaluate the weak spots on your home or business and then build a home hardening package that is right for you and your family. Prepare for the worst but know that you are working with the best.

Call now for an evaluation.